This challenge was suggested by my mum who makes the nicest lamb boulangere.  I didn’t plan this post very well and kind of decided very last minute that I would be making this one.  Unfortunately, my mum was off exploring Hamburg with some friends and I therefore couldn’t ask her for the recipe she uses.  So instead, I used this one by Tom Kerridge.

The recipe used a whole lamb shoulder, however, given that there was only Dave and I to eat it, I decided to half the recipe.  I therefore used the following ingredients:- 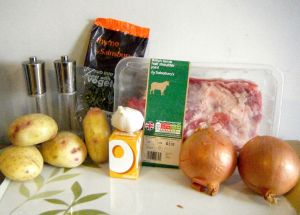 The recipe suggests serving this dish with french beans or other green vegetables.  I decided to do honey roasted carrots and parsnips with some savoy cabbage.

I started off by thinly slicing the onions and potatoes.  I remember my mum saying, the key to this dish is to get the onions and potato sliced as thinly as possible.  She actually uses a mandolin slicer but I don’t have one of these so I just took my time!  I didn’t do too badly but it did take ages!

The recipe says to combine the onions, potato and thyme in a bowl before seasoning it with salt and pepper.  I then placed the mixture into the bottom of my roasting tin. 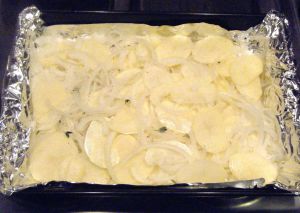 I was a little surprised by this as I had always remember my mums dish having neatly layered potato and onions.  In fact, once the dish was in the oven, I found a video of Tom Kerridge making this dish and he didn’t mix these elements together.  He simply layered them into the roasting tin.  He put a layer of onions, then a layer of potatoes and then sprinkled with thyme and salt and pepper; repeating this until he was left with a neat top layer of potatoes.   Oh well, one to remember for next time.

Anyway, with the potato/onion layer done, I placed the lamb on top with the skin-side up.  I cut small incisions in the lamb to place in the garlic cloves. I poured over the chicken stock and placed the lamb in the oven on 130 degrees celsius.

Practical tip: push the garlic cloves as far under the skin as possible to avoid them burning in the over. 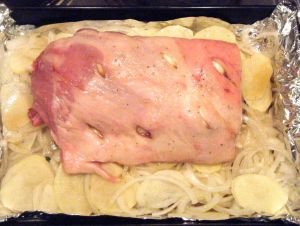 The recipe says to cook the whole shoulder for 4 to 5 hours and I therefore adjusted the cooking time to around 2 and a half hours.

After the 2 and a half hours were I up, I tested the lamb and it wasn’t very tender.  I therefore decided to let it cook for another 15 minutes at 130 degrees and then turned the oven up to 200 degrees for a further 15 minutes.  I then covered the lamb with foil and let it rest for 20 minutes whilst I prepared the vegetables. 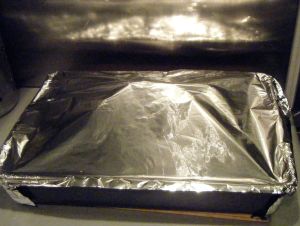 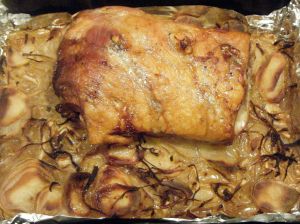 The lamb still wasn’t as tender as I would have hoped but it was getting quite late so I had to serve up. 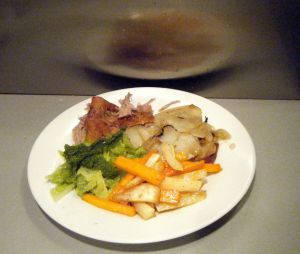 The taste was really nice but the lamb was not very tender and was really fatty.  Perhaps it was just a bad cut of meat or perhaps I shouldn’t have adjusted the cooking time.  Either way, this just didn’t live up to the one my mum makes and next time, I will definitely be asking for her recipe!

Coming up next, Challenge No. 43 – pumpkin pie.