This is another recipe suggested by my friend Rachel.  If you’ve been following Challenge 52, you may remember that Rachel suggested Challenge No. 11 chocolate ganache and cherry tart.  I’m not sure if there is some sort of telepathy going on between Rachel and my boyfriend, but she managed to pick dishes which Dave loves.  Chocolate and cherries are always a winner for him and if we have a roast dinner, Dave will always opt for a roast gammon.  It also happens to be one of the meats I’ve never got my head around cooking! So thanks for the great suggestion Rachel.

I started looking for recipes and came across the same issue I’ve always found when I cook gammon – the recipe tells you to do so much and then remove the skin, leaving a thin layer of fat which should be scored.  The joints of meat I’ve bought from the supermarket never seem to have skin on and I would always just get a bit confused!  This time, I decided to go to my local butchers to get the joint (and it had the skin on).  I even plucked up the courage to ask them whether I needed to soak the joint.  Traditionally gammon would need to be soaked to remove some of the saltiness, however, nowadays most joints don’t need this.  If you buy your meat from the supermarket, the package will normally tell you if this is the case and if you buy from your butchers, just ask them.

I found a yummy looking recipe for a maple glazed ham…yep…MAPLE GLAZED HAM!!! I got quite excited when I found this recipe because I love maple syrup 🙂

If you want to give this Challenge a try for yourself, you’ll need the following:-

My butcher recommended I soak the joint for at least a couple of hours but I opted to soak it for 24 hours.  I got my biggest pan out, squeezed in my joint of meat and covered it with water.  I didn’t quite know what to do next – should it go in the fridge or is it okay on the side?  I therefore turned to my on-hand cooking guru, my mum.  However, mum delegated this one to the best ham cook I know, my dad! He always has the job of cooking the Christmas ham and every year, without fail, it turns out perfectly. Dad confirmed I could leave the ham on the side and that it didn’t need to go in the fridge.

So after the ham had been soaking for 24 hours, I carefully removed the joint, tipped the water away and washed out my pan ready to get started.  I put the joint back into my pan and chopped up the vegetables.

I added, the chopped vegetables, cinnamon stick, peppercorns and bay leaf to the pan and then poured over the cola.  The recipe calls for 2 litres of cola, however, I didn’t even manage to get half of this in the pan.  I finally had to admit defeat and accepted that my pan was just too small.  I quickly shot out to the shop and bought a new super catering pan!  It didn’t look that big in the shop next to all the other catering equipment but when I got it home, I realised it was huge! Hey, at least the ham fitted in properly this time 🙂

With my new pan full of all the necessary ingredients, I added a bit of boiling water to ensure the joint was fully covered and turned on the heat.  It took quite a while to come up to boil so I patiently waited for this to happen and then turned it down to a simmer for 2 and a half hours.

Once the time was up, I removed the ham and put it in my roasting tin, which I lined with tin foil.  Previous experience with sugar glazing has taught me this is very important if you don’t want to end up scrubbing at your roasting tin for a few days after!

Practical tip: the recipe says to carefully pour the liquid away and then to let the ham cool down. I didn’t want to try and tip the liquid away whilst it was so hot (it was heavy and I would almost definitely have ended up hurting myself) so I lifted the ham out and then left the liquid to one side to cool down.

While the ham was cooling down, I prepare the glaze ingredients by mixing them all together in a jug.

When the ham was cool enough to handle, I took the string off and cut skin away.  It actually pealed off really easily, leaving a layer of fat.  I then just cut some of the fat away to even out the layer and scored it all over. 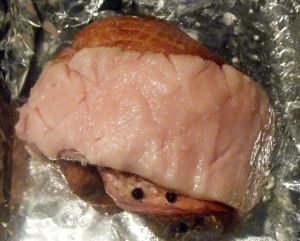 I poured approximately half the glaze over the joint of meat and put it in the oven for 15 minutes on 190 degrees celsius.  When the timer went off, I poured over the remainder of the glaze and returned the ham to the oven for another 30 minutes.  I glazed the meat half way through this final bit of cooking time.

With the cooking done, I removed the ham and covered it with foil, letting it rest for 10 minutes.

After 10 minutes, I tried to spoon over some more of the glaze but it had solidified in the bottom of the tin.  However, in all honesty, I don’t think it needed any more glaze so I didn’t worry about this and got on with the carving.

I served up with a delicious roast dinner consisting of polenta roast potatoes, cabbage, honey roasted carrots and parsnips, gravy and of course, giant Yorkshire puddings. 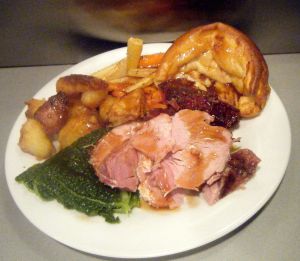 This ham was absolutely gorgeous! I ended up eating far too much and made myself feel ill but it was so worth it.  The leftover ham was also yummy the next night served up with homemade chips and a fried egg.

This was a great suggestion from Rachel and the recipe gave me and Dave a beautiful piece of ham to enjoy.

Coming up next week, Challenge No. 21 – Carrot Cake