On the week that Great British Bake Off returns to our TV’s, this seemed like the perfect challenge for me to make.  I’m so excited to see what’s in store for this year’s contestants and to get lots of inspiration for future bakes 🙂 We’re even having our own bake-off at work.  We each have a contestant and the week the contestant goes out the competition, you have to make a cake for the office.  I’ve got to get my thinking cap on so I can make a great cake and I’m hoping my contestant (Paul) does well! I’ll be sure to post a picture of my cake when he goes out or (hopefully) wins!

For now though, it’s back to Challenge 52 and my first attempt at battenberg.  This challenge was suggested by my colleague Dean.  Unfortunately, I messed up my planning a little bit and have made this challenge on a week when Dean is on holiday! I sent him a message to apologies and his love of battenberg is so strong that he told me my P45 was in the post! Thankfully he was only kidding but I’ve still promised to make it again for him in the near future.  Luckily it turned out to be really yummy so I’m more than happy to make some more (as it means I get to eat some too!) 🙂

For this challenge, I decided to make everything from scrap, so I spent Sunday making apricot jam, marzipan and the sponges before putting it all together to make a beautiful battenberg treat.  I used one recipe for the jam and another for the battenberg.  I then adapted the recipe from Challenge 15 Simnel Cake for the marzipan.

Obviously you could use shop bought jam and marzipan but if you fancy a go at making the full shebang, you’ll need the following ingredients:-

I started off by making the jam.  The recipe will make far more than you need for the battenberg (I filled one large jar and one small jar) but it tastes so yummy and will keep in the sterilised jars, it doesn’t matter.

I washed the chopped apricots and then put them in a large pan with the lemon juice and water.  I put the pan over a low heat and slowly brought the liquid up to a simmer. 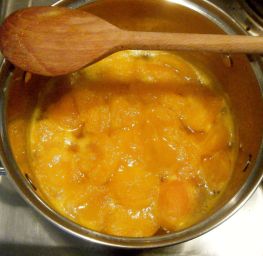 Practical tip: when juicing a lemon, pop it in the microwave for around 30 seconds to warm it slightly as this will help release more juice.

Once the liquid was simmering (careful not to boil it at this stage!) I set the timer for 15 minutes and waited patiently.  When the timer went off, I took the pan off the heat, poured in the caster sugar and stirred until this was fully dissolved.  I then added the butter, returned the pan to the heat and turned up the temperature slightly.

Once the mixture was boiling I set the timer for another 15 minutes and put a small plate in the fridge to chill.

When the 15 minutes was up, I used a teaspoon to put a small amount of the jam on the chilled plate.  I waiting 1 minute and used my finger to push the jam.  It was still a little runny so I left the pan bubbling for another 4 minutes.  I then tested it again and decided it was practically there.  I put the jam into my sterilised, hot jars and put the lids straight on.  I also put a little jam into some tupperwear to use for the battenberg so I could keep the jars sealed for another day.

With the jam done, I got started on the marzipan.  I sifted the icing sugar into a bowl and added the caster sugar and ground almonds. I mixed it all together and then made a well in the centre.

I put the egg, almond extract and lemon juice into a jug.  I then poured it into the well in the dry ingredients and started to bring it all together with a spoon.  It then reached the point where I needed to get my hands dirty and I finished mixing it by hand until I had a ball of paste.

I dusted my worktop with icing sugar and kneaded the ball of marzipan until smooth.  As mentioned above, I used this marzipan recipe when I made my Simnel cake and at this point the marzipan kept sticking to the worktop.  This time round I used a little more icing sugar when I dusted the worktop and I didn’t have the problem of it sticking 🙂

I put the marzipan ball into a bowl (dusted with icing sugar) and covered it with cling film.

Whilst the marzipan was resting for 2 hours, I got started on the cake.  The recipe uses the all in one method. So I started by putting the caster sugar, flour, ground almonds and baking powder into my bowl.  I added the softened butter, the eggs and vanilla and almond extract.  I gave it a quick mix with a wooden spoon to start bringing it together and then finished the job with my handheld electric mixer until combined.

I then separated the mixture into two separate bowls; using the scales to try and make sure it was roughly even.  I added some food colouring to one of the bowls and mixed until the colour was even throughout.  In hindsight I should have added a touch more colouring as my pink cake was not very pink but its one to remember for next time.

I don’t have a battenberg cake tin so I followed the recipe to separate my 20cm tin into two halves.  A bit of foil, some baking paper, some special folds and I was done.  It wasn’t as neat as I’d have liked and my sponge ended up a bit wonky but because I had to trim it down anyway, I wasn’t too worried. 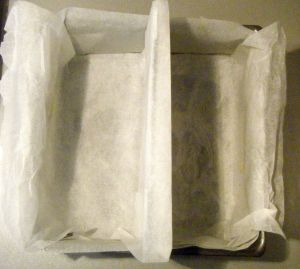 I put the different coloured mixtures into each side of the tin and popped it in the oven on 180 degrees celsius for 20 minutes.  I then checked the cake and left it in for approximately another 7 minutes.

Once the cake was cooked, I left it in the tin for 5 minutes before turning out onto a cooling rack. 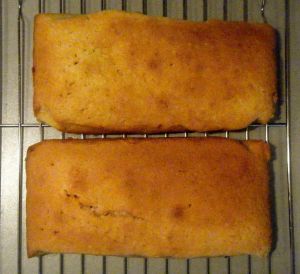 I waited until the cake was completed cool before trimming it into 4 equal oblongs.

Practical tip: be sure to trim off the top, bottom and sides of the cakes before cutting in half lengthways.

I then started to roll out my marzipan.  I positioned the slices of cake together to check whether I had rolled it big enough and had to make it a little longer.

Practical tip: put the marzipan between two pieces of baking parchment to roll it out.  This stops it from sticking to the worktop or your rolling pin but also means you won’t risk ruining the texture by adding more icing sugar.

I them heated up some of my jam and started to put it all together.  The recipe says to push it through a sieve but I decided not to do this as I didn’t think it was all that necessary.  I brushed the sides of my cake slices and put them together in a chequered pattern. 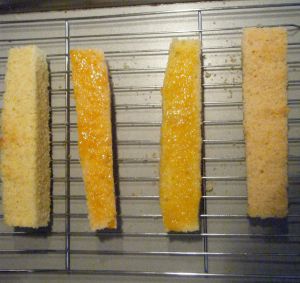 I put the cake onto the marzipan and rolled it over to cover.  I used my fingers to gentle press the join together.  I trimmed the edges and used the back of a knife to score a pattern into the top. 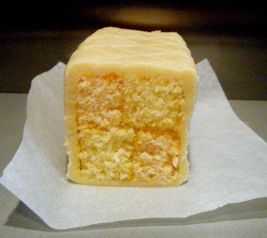 And there it is, my first ever battenberg. Oh my gosh was this delicious! I love cake, jam and marzipan…put them together and it’s like heaven on a plate.  A good cup of tea and a slice of Battenberg; definitely the best of British 🙂

Coming up next week, Challenge No. 32 – leek and gruyere quiche. Hope to see you then.